According to new information that came in this weekend about the Resident Evil Village revealed an eye catching details.

Last week, plenty of internal Capcom data was leaked online, and as tweeted by leaker @pokeprotos, this data also contains additional details about Capcom’s next RE installment, Resident Evil Village, including its release frame, DLC, pre-order benefits, multiplayer mode, and a possible demo ahead of the game’s release.

We already knew that Village is slated for a release next year, but based on the classified documents that the leaker shared, we might now have a more accurate release frame (if it still holds up in these uncertain times). According to the documents, RE: Village is slated for a release in late April 2021 with pre-orders kicking off around January 2021. A game demo is mentioned to be released 3 weeks before the game’s release.

More to that the leaked files mention various versions of the title, including a ‘normal’ edition, a digital deluxe edition that includes extra DLC, and a Collector’s Edition. An ‘E-Capcom’ version for PS4/PS5 has also been mentioned, but this version will likely only be available in Japan.

Aside from the main game, Capcom also appears to be releasing an online component, codenamed ‘DOMINION’ – in a similar fashion as Resident Evil 3 Remake’s online mode, Resistance.

Lastly, additional details about the Village’s pre-order benefits and the above-mentioned extra DLC pack leaked as well. This DLC pack, included with the digital deluxe edition, will sell for USD $25. The description of this DLC Pack, called ‘Ethan’s Trauma Pack’ reads:

“Three years later – Even now that he’s returned to a peaceful life, Ethan’s nightmare isn’t over.

The events he experienced at Baker mansion were so extraordinary that it leaves an inextinguishable scar in the back of his mind.

Visions of the past follow him everywhere, even in this case.

Ethan has made a break with his abominable past and

can you build a new future with your family…?

We’ve included an image detailing the DLC and pre-order benefits below. 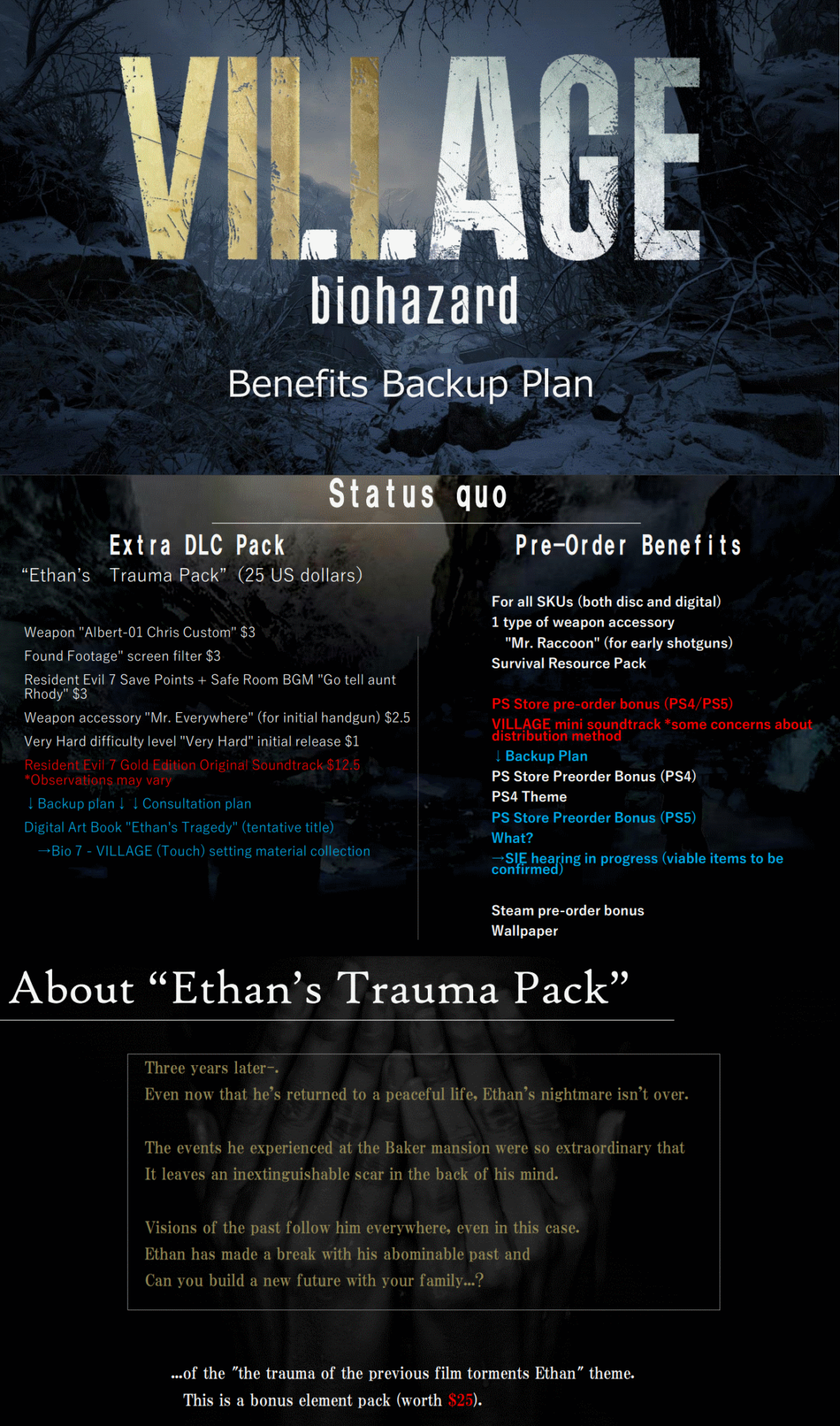 Right now, we can’t say whether the information above is 100% accurate. The details, however, do line up with what we’ve heard about the title. So we urge you take this above Info’s with a pinch of salt.

Resident Evil Village is releasing on PC, next-gen PS5, Xbox Series X|S, and hopefully, PS4 and Xbox One too. 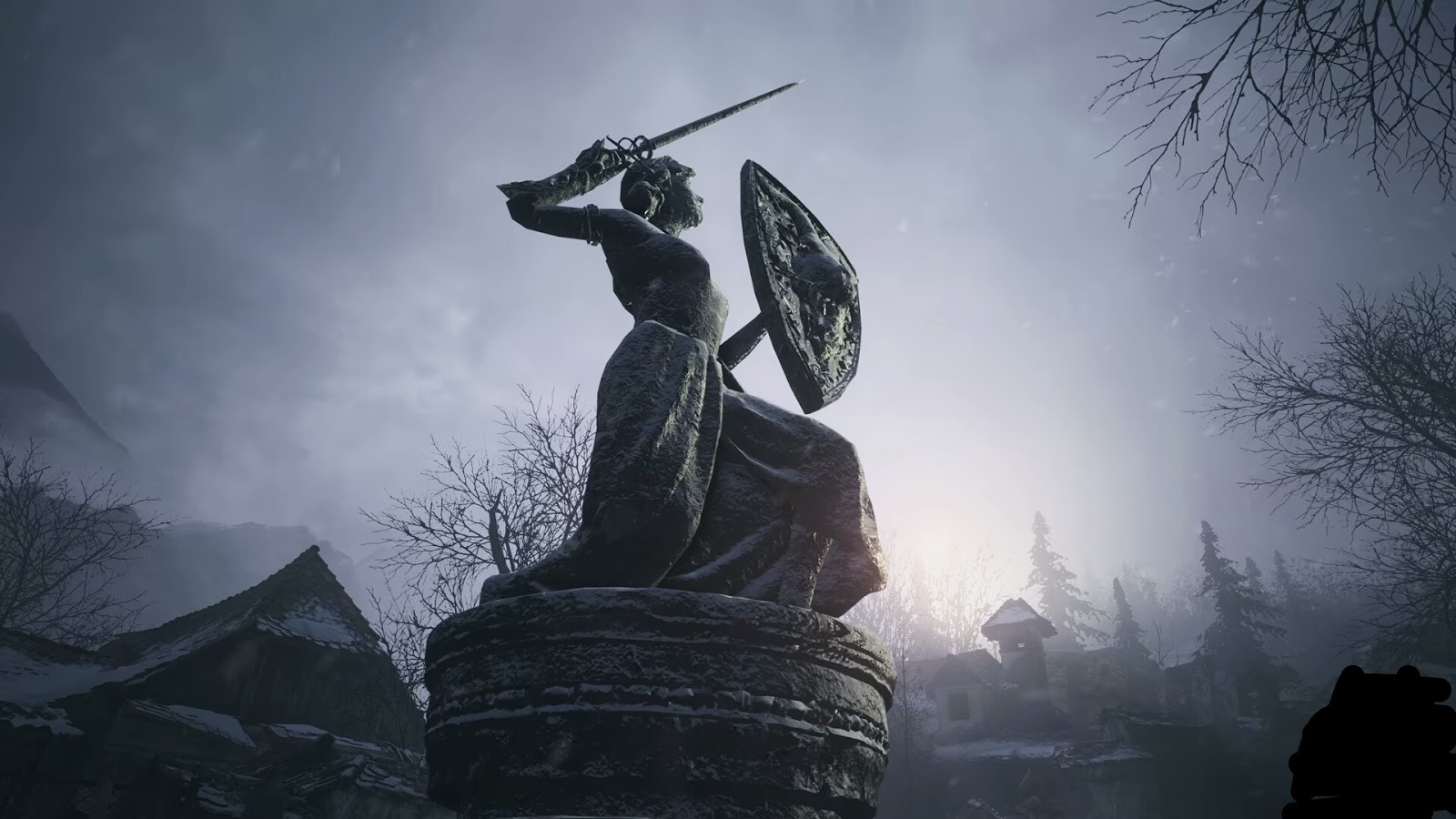 The development of Resident Evil Village is 60% complete, according to the latest issue of Famitsu.

According to Ryokutya2089, this week’s issue of the Japanese magazine confirmed that the next entry in the survival-horror series coming to PC and next-gen consoles in the future is 60% complete, and it has reached a turning point.

Famitsu also confirmed that the Resident Evil Village first-person view has evolved considerably over the one featured in the previous entry in the series. More info on the game, the magazine added, will be revealed next month.

Resident Evil Village was rumored to be a cross-gen game, but unfortunately the PlayStation 4 and Xbox One versions have been scrapped as they would have held back the game considerably, according to well-known insider Dusk Golem.